Sara Goldsmith Schwartz and William E. Hannum III have been selected for inclusion in the 2019 Massachusetts Super Lawyers® list in the area of Employment & Labor Law. They were first acknowledged by Super Lawyers® in 2004.

The Firm successfully defended an independent school against claims by a student that he was harmed by the School’s wireless internet network (“Wi-Fi”). The student and his parents sought accommodations that would have required the School to remove or disable its Wi-Fi. The School declined the student’s requests because there was no causal connection between the School’s Wi-Fi and the student’s alleged electromagnetic hypersensitivity. The student and his parents then filed a lawsuit in federal court, alleging claims under the Americans with Disabilities Act and common law claims.

After extensive discovery and nine days of expert hearings on causation related to the alleged “Wi-Fi allergy,” the School moved to exclude Plaintiffs’ experts from testifying and moved for summary judgment on all claims.

In sum, the Court recognized that the School’s enrollment agreement was drafted as an enforceable contract, while the Student Handbook was purely aspirational and not contractual. This is an excellent result for independent schools, and a reminder of the importance of having a well-drafted enrollment agreement and student handbook.

On July 17, 2019, the United States Court of Appeals for the First Circuit affirmed the judgment for the School on all counts, finding entirely for the School.

In February of 2019, Sara Goldsmith Schwartz argued this case at the First Circuit. The oral argument can be heard here.

One Chambers commentator said “the individuals’ expertise is a strength, but they combine that with a firmwide team approach to client service which is refreshing.” “This is the primary firm I use for labor advice,” reports another client. “My experience with the firm has been very positive. Billings are transparent and I am receiving high-quality legal advice at an acceptable fee.” “I think it is an exceptionally well-structured small law firm,” comments another source. “The team does a good job of handling our various teams. They’re able to make people feel comfortable and understand the object.”

Chambers USA has also recognized Sara Goldsmith Schwartz and William E. Hannum III as leading attorneys in labor and employment law in Massachusetts. This is the fourteenth consecutive year that Sara has been honored, and Will’s eighth year being acknowledged by Chambers.

Chambers USA 2019 reports that “Sara Goldsmith Schwartz’s prowess in the labor and employment space has earned her a loyal client base in the education sector, while she is also a prominent name in industries as diverse as retail, food and financial services. Sources say that she is ‘very well regarded’ in the Massachusetts market.”

“William Hannum is highlighted for his expertise in employment disputes, workplace investigations, labor relations matters and union avoidance, most notably with respect to the education sector. Sources affirm that he is ‘very responsive and very willing to work with in-house counsel.’”

The rankings, which are determined by a rigorous process that includes a detailed written submission by the Firm and in-depth, objective research and interviews, were published in the recent Chambers USA 2019 guide. Chambers and Partners publishes guides worldwide, and has been a recognized leader in its field since 1990.

Schwartz Hannum PC is thrilled to announce that it has been recognized as a Recertification Provider by the Society for Human Resource Management (SHRM). As a result of this certification, SHPC's webinars, seminars, and Boot Camps are eligible for Professional Development Credits (PDCs), as they relate to the SHRM Body of Competency and Knowledge (SHRM BoCK™). SHRM Certified Professionals (SHRM-CP®) and SHRM Senior Certified Professionals (SHRM-SCP®) are eligible for PDCs.

SHRM certification is the only HR certification offered by the world's largest HR membership organization, and is applicable across industries, geographic borders, job responsibilities, and career levels. As the industry leader in HR professional development, SHRM has supported more than 100,000 employers representing 140 million employees worldwide.

The Society for Human Resource Management is the world's largest HR professional society, representing 300,000 members in more than 165 countries. For nearly seven decades, the Society has been the leading provider of resources serving the needs of HR professionals and advancing the practice of human resource management. SHRM has more than 575 affiliated chapters within the United States and subsidiary offices in China, India and the United Arab Emirates. For more information about SHRM, visit the organization's website at www.shrm.org. 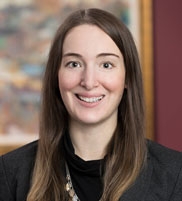 Schwartz Hannum PC is thrilled to announce that Rachel Adams Ladeau has joined the Firm's Labor and Employment and Education Practice groups.

Rachel assists employers with all aspects of labor-management relations, including collective bargaining agreement negotiation and administration, as well as labor arbitrations and unfair labor practice charges. Rachel also counsels employers in all other areas of the employer/employee relationship and regularly handles employment litigation and administrative agency claims.